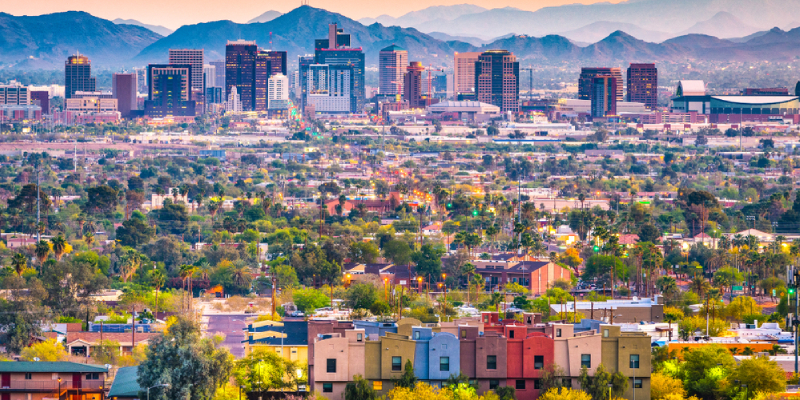 A perfect summer getaway, Phoenix is popular among tourists for its dry, warm climate and immerse themselves in art, culture, and a plethora of holiday activities and attractions. Golfing enthusiasts will especially love it here, however, the city also offers camping, hiking, biking, and rock-climbing opportunities.

If you wish to traverse slightly farther from the city for a weekend, below is the list of the top 10 weekend destinations in the city.

Located within the borders of Arizona and Utah, Monument Valley is one of the most recognizable and famous sights in the United States. With unique features and extremely unusual landscapes, the Navajo Tribal Park is an absolute must for nature lovers. Some of the most notable spots along the valley include North Window, Three Sisters, and Yei-bi-chai. Also, do not miss the slender 500-foot-high Totem Pole that looms majestically over the dunes.

Best Time to Visit: It is suggested to avoid the summers because of the hot desert climate. September to October and April to May are the most preferred time.

How to Reach: While driving from Phoenix to Monument Valley is the fastest option, if you want, you could also take a flight to Durango and cover the remaining 297 km by car.

Geographically isolated, Lake Havasu is an amazing oasis in the heart of a desert with over 300 days of sunshine. The city, named after the lake, now houses the original London Bridge that was dismantled in 1967 and brought here. As the largest park and public beach in the area, Rotary Community Park offers a variety of recreational activities to its visitors.

Best Time to Visit: Lake Havasu can be visited any time of the year except in summers. Spring break is highly recommended by those who love the crowds.

How to Reach: You could either drive directly to Lake Havasu if you prefer. Alternatively, you can take a flight to Quartzsite and cover the remaining 120 km by car.

Known for its outstanding red monoliths and buttes, Sedona enjoys an elevation of 4,500 feet and is often called a photographer’s dream. Sedona Heritage Museum records the history of early settlers in the area since the mid-1870s and is set within a house from that era. The 1.8-mile hike back and forth from Devil’s Bridge Trail is a great adventure for outdoorsy people.

Best Time to Visit: March to May is the best time to explore Sedona, especially for hikers.

How to Reach: The cheapest way to get from Phoenix to Sedona is to take a train from Jefferson/1st Ave to 44th t/Washington then transfer to PHX Airport/44th St Station and take a bus to Flagstaff Station and change once more to go to Sedona.

A popular mining town found in 1880, Bisbee is truly a unique weekend experience. The Copper Queen Mine, although shut down for over 30 years, still reels in a lot of tourists who wish to get inside the mountains and feel what it was like to be a miner back in the days. If you are brave-hearted, sign up for the Old Bisbee Ghost Tour at your own risk – stroll through the deep, dark alleyways where apparitions have been reported.

Best Time to Visit: September to November is the most favorable month to visit Bisbee.

How to Reach: The easiest and the fastest means of public transportation between the two locations is to first take a bus to Nogales and then to Bisbee. It takes 5 hours and costs $35 to $71 for the journey.

One of America’s most iconic attractions, the Grand Canyon is a truly awe-inspiring natural feature that has been attracting hundreds and thousands of visitors for years from all over the world. There are two rims, north and south, that can be accessed via two opposite sides, but the south is more popular. The visitor center and Mather Point Overlook, the Rim Trail, and the Hermit Road Drive are some of the noteworthy sights here.

Best Time to Visit: March to May and September to November are the most popular months to visit Grand Canyon.

How to Reach: To get from Phoenix to Grand Canyon, take a train from Jefferson/1st Ave to 44th t/Washington then transfer to PHX Airport/44th St Station to Flagstaff Station. From here, change to Flagstaff Amtrak and take a bus to Maswik Lodge to get to Grand Canyon.

Popularly known as the ‘entertainment capital of the world’ and ‘Sin City’, Vegas is perhaps one of the most frequented destinations in the country. The 2.5-mile boulevard, also famous as ‘The Strip”, is where all the action is. From massive entertainment palaces to luxury hotels to top-of-the-line dining and shopping venues, you can find them all here. Do not miss the light and sound show at the Bellagio Resort on your visit here.

Best Time to Visit: Although Vegas can be visited anytime during the year, March to May and September to November are the most suggested months.

How to Reach: A bus from Phoenix to Las Vegas takes slightly over 5 hours and costs between $30 to $60.

The second-largest city in Arizona, Phoenix being the first, Tucson is dotted with green landscapes, beautiful architecture, desert flora and fauna, and an amazing collection of Mexican diners. Pay a visit to the Arizona-Sonora Desert Museum that is known for its massive displays including botanical gardens, art galleries, zoos, and aquariums. If you are feeling rather pumped up, hike up the Sabino Canyon and enjoy the astonishing views. For something unique, explore the Pima Air & Space Musuem, one of the world’s largest air and space museums.

Best Time to Visit: The most preferred time to visit Tucson is between April to May and September to October.

How to Reach: A direct bus between the cities takes two and a half hours and costs between $18 to $26.

Remember seeing a photo of a narrow slot canyon with curvy orange walls and radiating light beams? Yes, that is the Antelope Canyon for you even though you may not have realized it at the time. The light beams at the Upper Antelope Canyon have increasingly become a major tourist attraction for travelers to the US, especially outdoor enthusiasts. Though it can get extremely packed during the seasons, the tours here are extremely organized for you to enjoy and take in the views.

How to Reach: The fastest and the most economical way to reach Antelope Canyon from Phoenix is by driving. This takes under 5 hours and costs between $29 to $41.

Famed as the ‘largest ghost town in the United States of America’, Jerome has been a popular destination among history buffs and nature lovers. Formed around the 19th century as a popular mining town, the city is filled with quirky attractions such as the open-air museum called the Gold King Mine and Ghost Town, the Abandoned Post Office, and the Sliding Jail.

Best Time to Visit: The best time to visit Jerome is between October to April.

How to Reach: The fastest and the most affordable journey between Phoenix and Jerome is by car. A drive between the two locations takes under a couple of hours and costs between $11 to $16.

A one-of-a-kind town with four distinct seasons and occasional snowfall, Prescott enjoys being at a height of 5,300 feet. Engulfed by clear lakes and Ponderosa pines, the town offers quite a selection of activating including but not limited to fishing, boating, hiking, and camping. Visit the 1916 Courthouse Plaza set in the heart of Prescott’s historic downtown. Take in the stunning views of Watson Lake. Enjoy a hike within the lush landscapes of Prescott National Forest.

Best Time to Visit: To enjoy a pleasant climate and avoid harsh summers, it is best to visit here between May and October.

How to Reach: To get to Prescott, take a bus from Buckeye Road & 24th Street to Sky Harbor West and then to Prescott.

Originally known as Colorado City, Yuma became quite the place for American opportunists during the 1849 Gold Rush. To truly experience the highs and lows of the city’s past, take a historic tour of the North End and enjoy the entertainment, shopping, and dining opportunity that come along. Get a spine-chilling experience at the Yuma Territorial Prison which held over 3000 prisoners during its 33 years of operation.

How to Reach: Buses from Phenix go directly to Yuma and they take around two and a half hours to cover the journey. Expect to pay between $30 to $85 for the tickets.