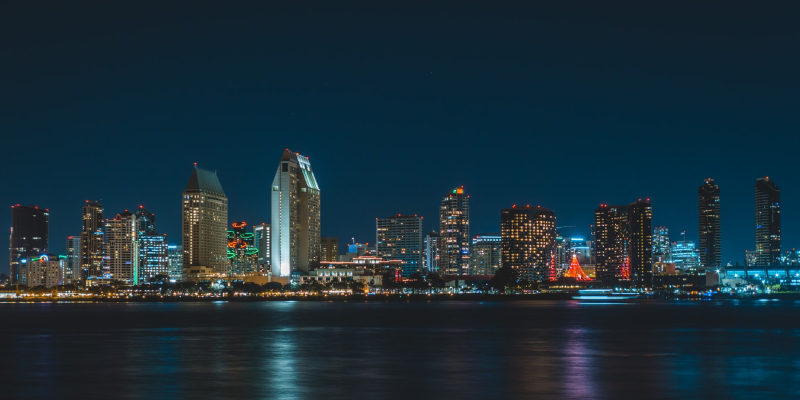 A trip to southern California isn’t justified without a visit to the serene beaches of San Diego. Nestled on the stunning coastline of Pacific Ocean, the oldest town in California is perfect for outdoor activities and boasts several museums, Spanish Colonial-dated architecture, manicured gardens, and the world-famous San Diego zoo.

If you are planning a weekend excursion around the city, here is a list of the top 10 weekend destinations from San Diego which are worth a visit.

Home to several historical landmarks as well as contemporary attractions, the humble city of Monterey was the former capital of Spanish California between 1770 to 1882. Once a significant fish packing district, Cannery Row has been transformed into a spectacular tourist spot with several shops and restaurants. Some famous tourist sights to visit here are the Monterey Bay Aquarium, 17-Mile Drive, Point Lobos State Natural Reserve, and Monterey Museum of Art.

Best Time to Visit: If you are a foodie, you must visit the town between the months of April and May as spring brings in warmer temperatures, lesser visitors, and a whole bunch of food festivals.

How to Reach: Board a flight from San Diego to San Jose and get on a shuttle from San Jose International Airport to get to Monterey. All of this would take under 5 hours and cost between $82 to $270.

The perfect combination of sun, sand, and sea, Santa Cruz is home to the stunning Santa Cruz Beach Boardwalk that offers a complimentary seaside amusement park, the iconic Giant Dipper roller coaster, gaming arcades, bowling alleys, as well as air hockey. The area is also dotted with diners, cafes, and dessert places. Other places of interest in the city include West Cliff Drive and the Surfing Museum, Natural Bridges State Beach, and Roaring Camp Railroad.

Best Time to Visit: The best time to visit the city is right after the summer crowds have left i.e.between the months of September to November.

How to Reach: The fastest option to travel between the two destination is by getting on a flight to Monterey and then hailing a taxi ride to Santa Cruz. This will take around three and a half hours and cost between $228 to $555.

Best Time to visit: Thanks to the wide variety of activities and attractions in the area, Lake Tahoe can be visited throughout the year. However, the months from March to May and from September to November are the most preferred.

How to Reach: Lake Tahoe is only an hour and a half from Reno-Tahoe International Airport. Take a flight to Reno and transfer to the international airport to reach Lake Tahoe. Expect to spend five and a half hours and between $100 to $200.

Inspiring artists, nature lovers, and adventure enthusiasts for decades, Yosemite National Park has been one of the most famous holiday spots not only in the region but also in the entire country, or perhaps even the continent. Yosemite Valley is undoubtedly the most spectacular part of the national park and it houses the Yosemite Falls, Half Dome, and El Captain. To enjoy a truly magnificent view of the valley, head over to Tunnel View.

Best Time to Visit: May and September are the best months to visit the National Park. It is important to remember that the park is closed most of the year due to snow.

How to Reach: The fastest and the most convenient way to get to Yosemite is by driving. You would spend slightly over eight hours and $45 to $65 for the journey.

Considered to be more of an experience than a weekend getaway, Big Sur enjoys a 90-mile rugged coastline. With attractions such as 80-foot waterfalls plunging into the sea and Keyhole Rock Formations, the area is also home to other popular attractions such as Pfeiffer Beach, Bixby Bridge, Pfeiffer Big Sur State Park, and Henry Miller Memorial Library. If you love hiking, Ewoldsen Trail is a total blessing.

Best Time to Visit: Big Sur enjoys over 300 days of sunshine and it can be visited anytime from April to November.

How to Reach: The easiest mode of transportation between San Diego and Big Sur is a self-driven car. It will only take seven and a half hours and cost between $43 to $61 in fuel.

Recognized as a hidden gem of Orange County, Laguna Beach is home to a thriving artistic colony, a great spot for art enthusiasts. Unlike the other coastal cities of California, Laguna Beach is blessed with seven miles of stunning beaches and spectacular coves where you can enjoy exploring natural tide pools, sea caves, and ocean side bluffs. The beach is also popular for housing the maximum number of beachfront accommodation options in the entire state. Laguna Beach is also known for its 20,000 acres of stunning wilderness.

Best Time to Visit: The months of April to May and September to October are the best to visit the beach.

How to Reach: You could take a train from San Diego San Juan Capistrano Amtrak Station and then a taxi to the beach for $70 to $90. Alternatively, you can drive between the two cities for $8 to $11 in fuel. Both means take slightly under two hours.

Popularly known as L.A., Los Angeles is the celebrated home of the international film industry, commonly known as Hollywood. One of the most culturally diverse cities on earth, the city boasts outstanding shopping avenues, a thriving culinary scene, and some amazing museums. Some of the places you cannot miss visiting include but aren’t limited to Universal Studios Hollywood, Griffith Park, and Griffith Observatory, and of course, the Santa Monica Pier.

Best Rime to Visit: The best time to visit L.A. is between March to May and September and November.

How to Reach: There are plenty of direct trains, buses, and flights between the two cities.

The largest city in California and the second-largest in the United States of America, Los Angeles is best known as the home of Hollywood. Popularly known as L.A., this dreamy city is home to several established and wannabe movie stars, musicians, as well as professional surfers.

Known for its intrinsic desert landscapes and rugged rock formations, Joshua National Park is characterized by gold mining ruins and vast desert land swarmed with oddball trees. Situated at the confluence of the Mojave Desert and the Colorado Desert. Visitors come here for the unbelievable sunsets and stay for nights filled with outstanding stargazing opportunities. Wildlife lovers would also enjoy witnessing the wide variety of desert wildlife.

How to Reach: If you don’t want to drive two and a half hours from San Diego to Joshua Tree, you can get a bus to El Centro and then change over to Palm Springs North. From here, Joshua Tree is slightly over half hour by taxi.

Surrounded by several natural elements, Morro Bay is best known for Morro Rock, a humongous 576-foot volcanic ruin at the entrance of the bay. Blessed with miles of coastline and a dedicated National Estuary bristling with wildlife, Morro Bay is also home to the Museum of Natural History, Morro Bay State Park, and the Embarcadero – the main promenade in the town swarming with shopping avenues and restaurants.

Best Time to Visit: The fastest and cheapest way to get from Los Angeles to Morro Bay is by driving which takes under four hours and costs between $20 to $35.

How to Reach: The fastest, easiest and the cheapest method of travel between San Diego and Morro Bay is by car. It takes under six hours and costs between $34 to $48.

Be it for the surreal beauty of the Pacific Coastline or for the curiosity of viewing some of the finest breeds at the famous San Diego Zoo, the city is certainly one of the best weekend destinations for tourists from all over the world. So, pack your bags right away and get ready to taste some of the most delicious Mexican and Californian dishes and to have a time of your life.